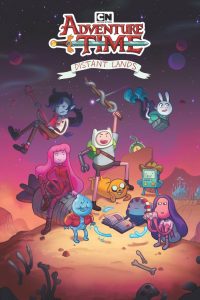 BMO is traveling through space on a mission to terraform Mars when he meets a small eyeball like robot, whom BMO dubs Olive. The mysterious robot suddenly transports BMO’s ship into a distant part of space, which contains an ailing space station called The Drift. BMO encounters a young rabbit girl named Y5 (voiced by Glory Curda), who is a scavenger. Y5 plans to take BMO and have him sold for parts so as to impress her disapproving parents (voiced by Tom Kenny and Michelle Wong). Hugo (voiced by Randall Park), the leader of The Drift, cannot find anything useful from BMO, but needs a crystal from one of the jungle pods on The Drift so as to power a ship that will allow the Drift’s residents to escape the station. BMO is hurt when he learns what Y5’s plan was and ventures into the jungle pod by himself. However, BMO is betrayed by Hugo’s assistant Mr. M (voiced by Stephen Root) and is left to die in the pod.